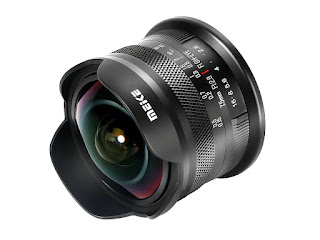 Meike, a fairly new Chinese company founded in 2005, has managed to find for itself here in the US a niche market as a manufacturer of relatively inexpensive manual focus video (cine) and stills lenses for a wide variety of camera mounts.  Its most recent entry, announced last week, is a 7.5mm f2.8 fisheye lens for six APS-C mounts.  The price is an astonishingly low $149.
Meike's other lenses have received mixed reviews, but I think it's unrealistic to have high expectations of budget lenses.  They obviously must be held to a different standard than those costing thousands of dollars that are made by established camera manufacturers.  Since a fisheye is by its very design something of a novelty lens and therefore in most cases used only infrequently, a budget model, provided it meets minimal standards, is one I'd be much more likely to buy than a pricier competitor.  It's quite possible then that I'll pick up the new lens for my MFT Lumix G9 when the lens becomes available at B&H.  If I do, I'll of course post my experience using it as well as sample photos taken with it.
Posted by Frank McAdam at 9:52 AM